Welcome to the Chaos In The Blink of an Eye series blitz and GIVEAWAY, hosted by JustRead Publicity Tours! CHAOS IN THE BLINK OF AN EYE: PART SIX – THE SEALING releases Autumn 2018!


What started the Chaos in the Blink of an Eye series for Patrick Higgins stems from his deep love of sports, which, he admits has diminished considerably over the years. He still enjoys watching and attending sporting events whenever he has the time. But these days he views them from an entirely different perspective than when he wore a younger man’s face and displayed a weaker man’s faith in God.

This slow but gradual shrinking away started soon after Higgins was saved. The Lord impressed upon his heart that the fastest growing religion in America, and the world for that matter, wasn’t Christianity or Islam, but “sports”. Every day of the week—including Sundays—millions of fans fill stadiums and arenas (or shall we say cathedrals?) worldwide to worship their heroes.

Whatever the sport, fans show up in droves to cheer on mere mortals as if they were gods. When their teams win life is good. When they lose life is miserable. As a once-guilty participant for many years, Higgins should know.

The passion most fans have for their favorite players and sports teams is the same passion they should have in pursuing the One who saw their unformed bodies from the foundations of the world, the very One who knit them together inside their mothers’ wombs. Tragically, this is not the case. Hence, the reason for the CHAOS series.

The sporting event Higgins chose for the story was the famed Michigan-Ohio State college football rivalry. Prior to writing the prequel, he traveled to Ann Arbor, Michigan to attend the game. He admits to being just as caught up in the mass hysteria as everyone else. Higgins said it was impossible not to be swept up into the vortex that had completely engulfed the vibrant college town.

The energy was quite palpable. So much so that Higgins had to remind himself more than once that he was there to research and observe everything connected to the game, then put it all into words for his readers. The sporting event itself was secondary.

Though the prequel initially centers on the football game, in no way is this a sports series. If you decide to read it for yourself—and we hope you will—this will become quite clear to you when Bible prophecy comes to pass inside Michigan Stadium. Many suddenly vanish into thin air, leaving everyone still inside the stadium utterly panic-stricken. It was just the beginning of things to come, as life as humanity had known it was forever changed in the blink of an eye…

Each day of the blitz spotlights a different book from the series – follow along with the tour to learn about each of the first five books individually! Patrick Higgins is the author of “The Pelican Trees”, “Coffee In Manila”, the award-winning “The Unannounced Christmas Visitor”, and the award-winning prophetic end times series, “Chaos In The Blink Of An Eye.”

While the stories he writes all have different themes and take place in different settings, the one thread that links them all together is his heart for Jesus and his yearning for the lost. With that in mind, it is his wish that the message his stories convey will greatly impact each reader, by challenging you not only to contemplate life on this side of the grave, but on the other side as well. After all, each of us will spend eternity at one of two places, based solely upon a single decision which must be made this side of the grave. That decision will be made crystal clear to each reader of his books. 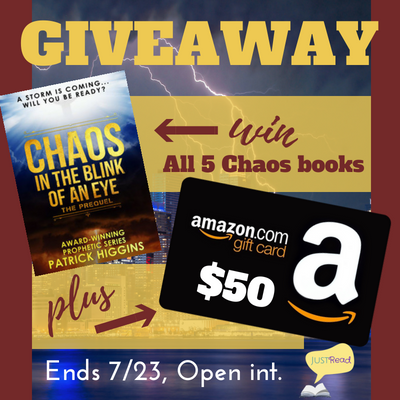 Patrick Higgins is giving away to one (1) winner:

Open Internationally as long as recipient can accept a gift card from US Amazon. Books available in winner’s choice of ebook or print, although ebook only for international winner.

Enter via the Rafflecopter giveaway below. Giveaway will begin at midnight July 16, 2018 and last through 11:59pm July 23, 2018. Winners will be notified within a week of close of the giveaway and given 48 hours to respond or a new winner will be chosen.